Be it during a football match in your university or a part of the debate team while representing your school, we have all worked and collaborated with people in every stage of our lives.

We have all been part of a team where the end result wasn’t what we expected but still, we felt a sense of accomplishment because we worked very well as a team. We felt a sense of belonging, a sense of synergy. On the other hand, there were teams in which we managed to get the trophy or the tag of the ‘winning team’, but it still left us with a bitter taste. People were bickering behind each other, there were a lot of misunderstandings and no sense of trust amongst each other.

This scenario can be seen even in today’s workplaces. Some teams perform excellently while others languish.

Whatever be the case, teamwork has become more essential to success than it was before. According to a study by Gusto, 54% of employees say that a strong sense of community (great workers, celebrating milestones, a common mission) keeps them at a company longer than is in their best interest.

So, let’s have a look at five points that can help your teams in being successful. 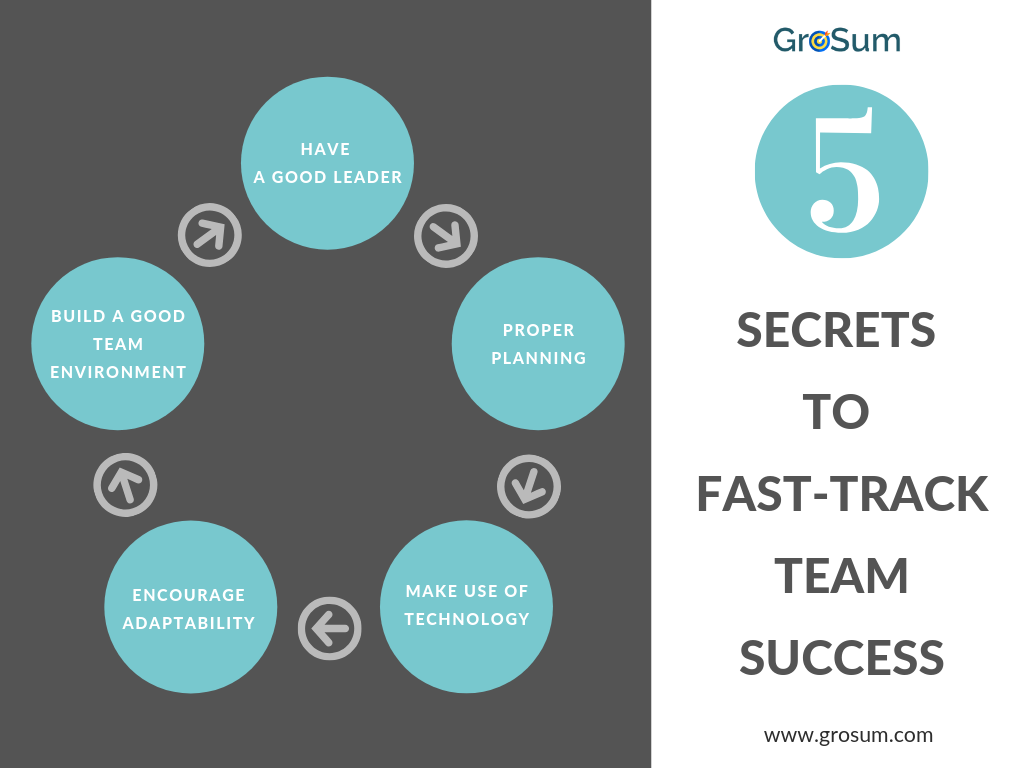 1. Having a good leader

There are leaders like Steve Jobs that are known for their authoritarian style of leadership. Then there are others who are known to be empathetic leaders. To point out which type is the best can invite an endless round of debates and examples from both sides that have been really successful leaders.

But the best leaders are the ones that know every situation needs them to wear different kind of hat. When the team is running downhill and is demotivated, it’s time to empathize and motivate the members. When there are too many problems arising because of negligence and irresponsible behaviors, the leader needs to be authoritative and set things right.

When a team member is going through some personal turmoil in their life, the leader should be understanding and helpful. On the other hand, when a leader comes to know about a member’s habit of creating misunderstandings between the team members, the leader has to step in and take some serious measures.

For some leaders, this ability to switch roles comes naturally. For others, it comes with experience. Whatever may be the case, while choosing a leader, various skills and qualities should be taken into consideration. Also, the leader should be someone that the team will readily accept and look up to.

Below are some points you can take care of:

Taking care of all these things will ensure that you have a team which is walking together to success instead of pulling each other down.

Improper planning can not only take you away from the desired results, but it will also lead your team astray and make them feel demotivated.

Firstly, the team leader should understand the requirements of the project from the client or from top management. After knowing this, he/she list down all the steps that will be required for completing the said project.

Break these steps into actionable tasks. Further, the team leader should understand the teammates’ abilities, skills, personalities and then assign these tasks. Set due dates taking into consideration that sometimes your key member would go on leave, there could be a strike, some members could be assigned to a different team requiring urgent work and so on.

Conduct a team meeting before finalizing these things. Hear out the teammates and be open to changing certain things if necessary. This will also empower them as they get a say in making key decisions about the project. Additionally, it instills in them a sense of accountability, for they actively took part in the decision-making process.

He found out that the kindergarten students were the most successful. Why? Because they weren’t afraid to change the plans as they failed. While the rest of the teams of business graduates and others built a plan and remain stuck to it despite failures.

While planning is necessary, following the same plan when situations change can lead the team astray. In fact, Jeff Bezos states, “The smartest people are open to new viewpoints, new information, new ideas and contradictions to their own way of thinking. They constantly revise their understanding and reconsider a problem they thought they had already solved.”

So, the next time a situation around you changes, don’t be afraid to revise your plan. Encourage your teammates to find new ways to be more efficient, develop new perspectives that might help the entire team and search for better solutions to existing problems.

5. Make use of technology

According to a report by McKinsey, knowledge workers spend an average of 14% of their workweek in collaborating and communicating internally. The study further states that improving internal collaboration through social tools could help raise productivity by as much as 20 to 25%.

With the advent of technology and the increasing reach of it to every business across the globe, it becomes imperative for businesses to shift to the latest collaboration tools.

Your team could use a team collaboration software or project management software to keep yourself, your team and top management updated about each and every step in the project.

With the help of project management software, project scheduling, setting milestones, setting dependencies between tasks and making templates becomes easier. Your team can see the progress at every stage and not lose track of the work.

With these tools, file sharing becomes much easier. This proves to be an advantage for the remote workers on your team. They can access the files sitting at their home and stay in constant touch with the other team members. This can help fight the problem where remote workers feel shunned and left out, according to this study by Harvard Business Review.

Teams can often make or break your business. While these are just five things to have a successful team, it takes constant improvising and experimenting to see what works for your team and your organization.

Michael Jordan has put the wonders of teamwork in perfect words, “Talent wins games but intelligence and teamwork can win championships.”

Shyamal is the Founder of SmartTask, an online work management tool that’s helping teams be more productive by having clarity on who’s doing what by when. Has a penchant for researching and sharing strategies that could benefit a team’s productivity.

[…] existing on different sections of the introvert-extrovert scale. In the workplace, the extent of a team’s success can often depend on the personality of each team member and how they work with others. Therefore, […]