The 10 Reasons Why People Change Jobs [By Industry Experts]

People are willingly switching their jobs at an alarming rate and it’s not just millennials. When a person changes jobs it costs their former company 1.5-2x that person’s salary on average.

The company has to hire, train, and wait for the new hire’s productivity to reach the level of the former employee. Managers are quicker to hire and fire meant that the companies are missing out on employees that would be seriously valuable over time.

The days are gone of sticking with one career for life so we should not be surprised by hearing that millennials changing jobs more than any generation before them.

So, here we are presenting the reasons behind this job switching environment in today’s world by sharing the views of several thought leaders.

Here, the list of the reasons and opinions of the experts. Read on.

1.Unsatisfied chemistry with the immediate manager:

The founder and CEO of VANS, Srinivas stated that in most of the cases the employees quit their job due to their relationship with their manager. 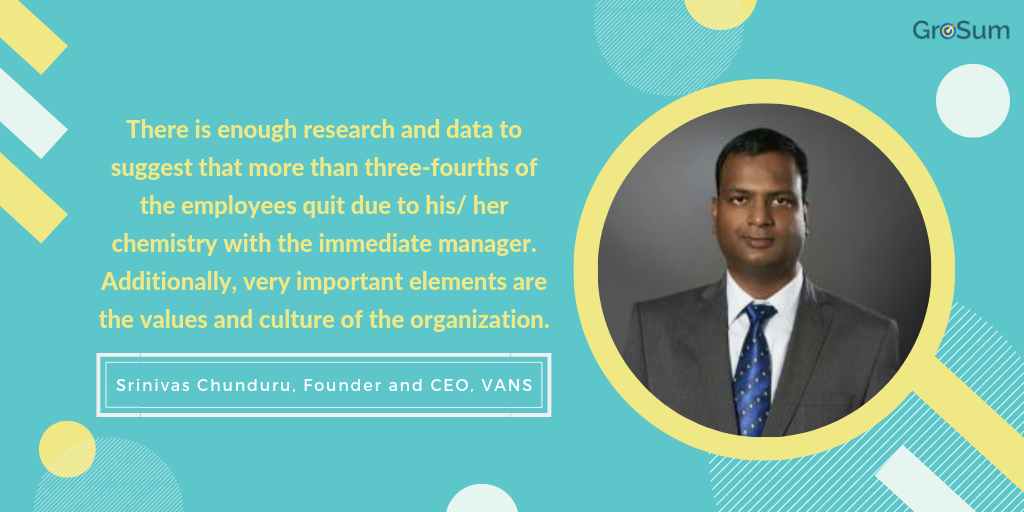 Therefore, important elements are the values and culture of the company.

But, there is some way out of this situation suggested by Srinivas Chunduru are:

2. Organizations are unable to show employees’ a clear direction of their career path:

A compulsive out-of-the-box thinker, Kaustabh Sonalkar believes that the current time is fast-paced and in times of instant appreciation and gratification a company will be unable to hold high potential employees without furnishing enough meat in the role.

There is no doubt that people leave organizations for their managers but they also quit if you are unable to show them a clear direction in terms of their career path. 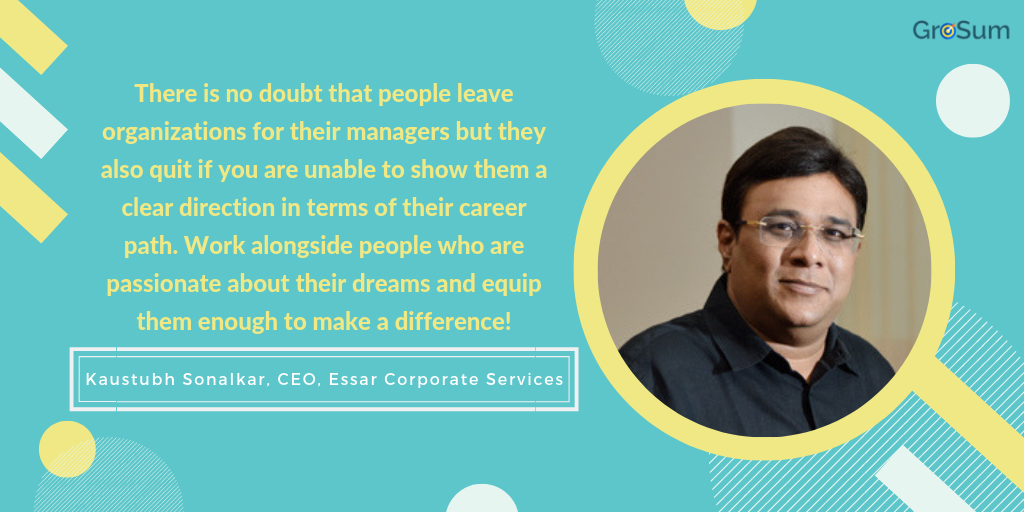 The culture of every organization should provide bandwidth to take any risks, explore and innovate where the true innovation can be realized.

According to him, a performance system that enables the organization to achieve its goals is the most effective performance management program.

3. Lack of engagement and inspiring atmosphere:

She suggested training managers and employees on giving and receiving positive and negative feedback on an ongoing basis. 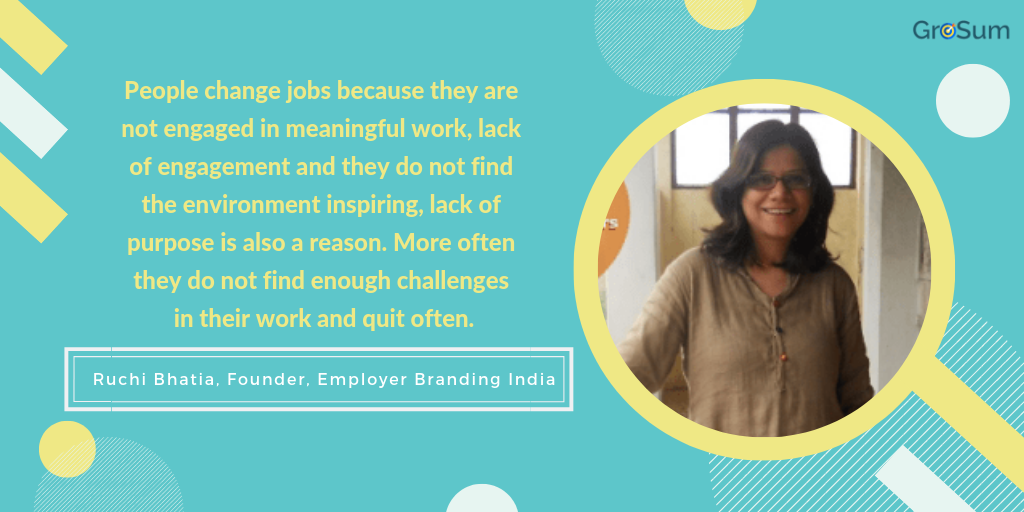 Not only that encourage employee participation linking the performance management with retention, development and succession planning initiatives can help to put a stop to this situation.

According to Rob Burn employees with a few exceptions knew about the job is and the amount it pays when they accept the job and they choose cited reasons for leaving it to avoid difficult conversations.

He feels that a lack of trust is at the root of most people leave the organization. 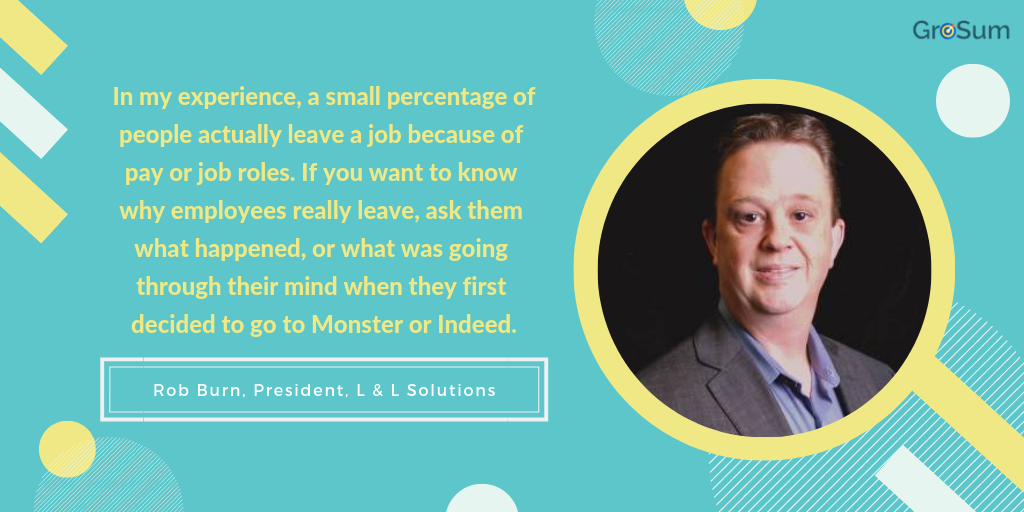 5. When employees’ personal needs do not get fulfilled:

HR Leader Harjeet Khanduja believes that people leave for various personal needs which do not get fulfilled in an organization.

According to him, the need could be money, ambition, work environment, social standing expansion of needs or anything which should be perfectly understood by the management. 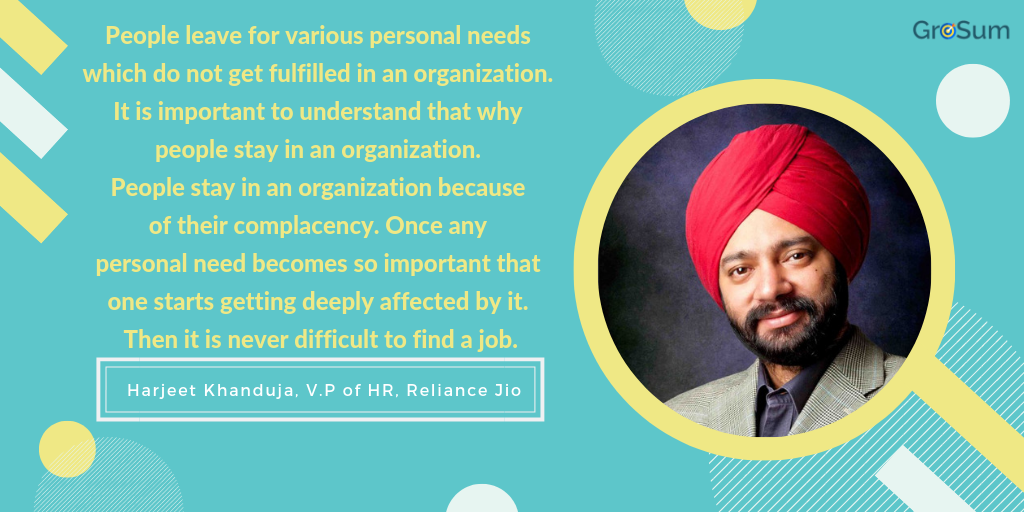 Anil Dagia also feels that unfulfillment in the job leads to quitting jobs among the employee and that’s why an organization that has a strong focus on creating an environment for the employee to be felt fulfilled, have shown miraculously lower attrition rate. 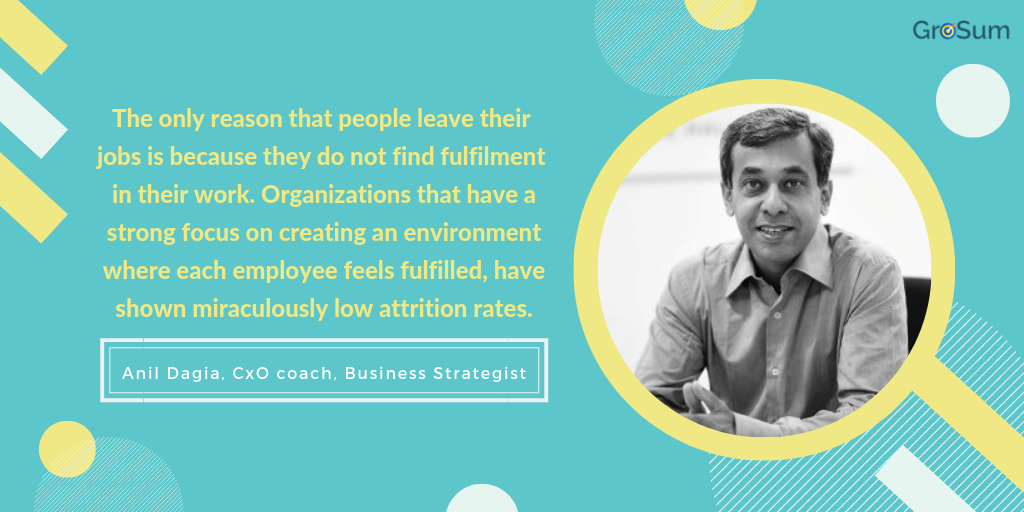 Adil Malia, CEO of The FiRM believes that not only bureaucracy in decision making but restraining culture rigidity, involvement with customers and suppliers discouraged, disengagement with core process is also the reason of often job quitting among the employees. 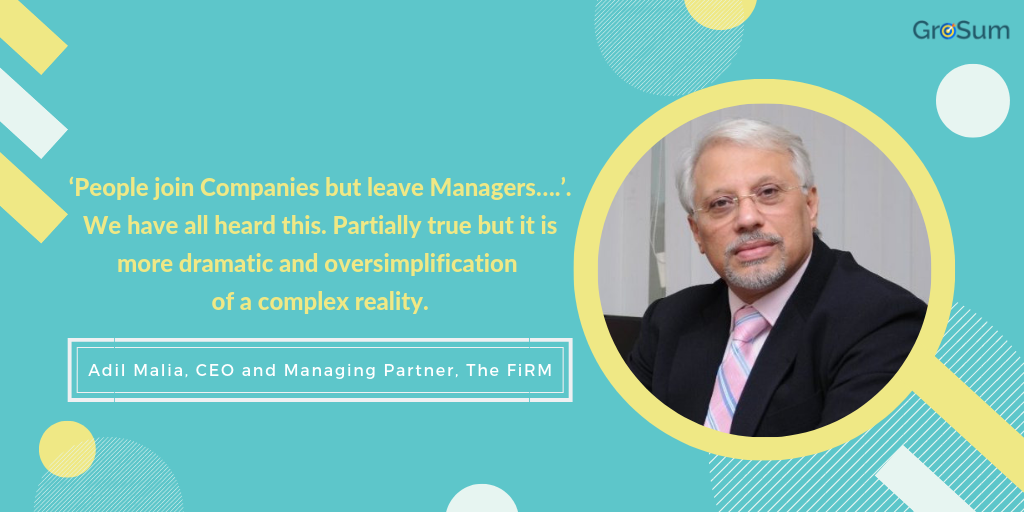 7. Generation gap with the peer group:

Jaydeep Goswami feels that other than job roles generation gap with the peer group, lack of learning opportunities to take meaningful decision can provoke the employees to quit the job. 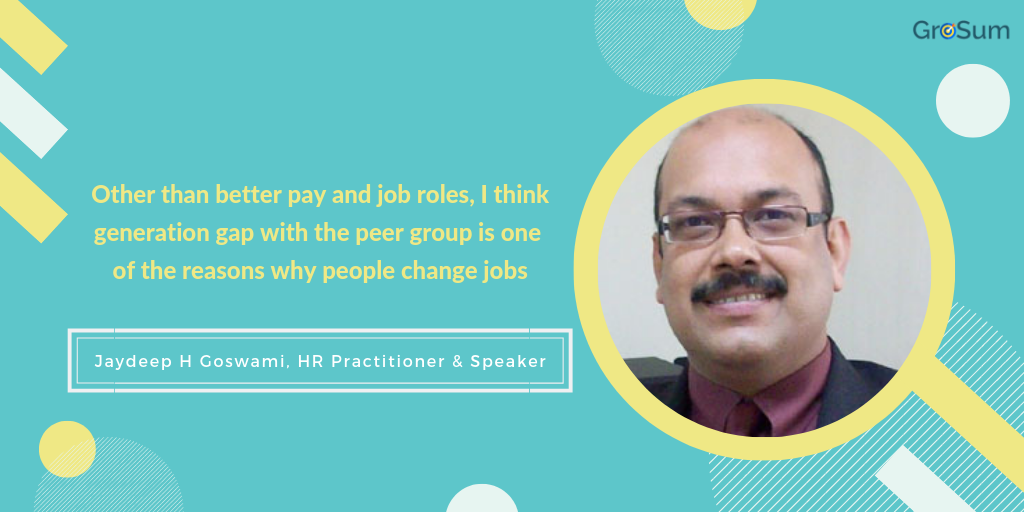 Colin Mendes feels that the employees are continuously seeking their purpose and as an organization, they must be able to provide a linkage to their purpose failing which could lead to attrition.

Nowadays, one of the top reasons for attrition across generation has been on account of work-life balance. A millennial seeks to balance their social time while Gen X seeks time to be spent with their families. 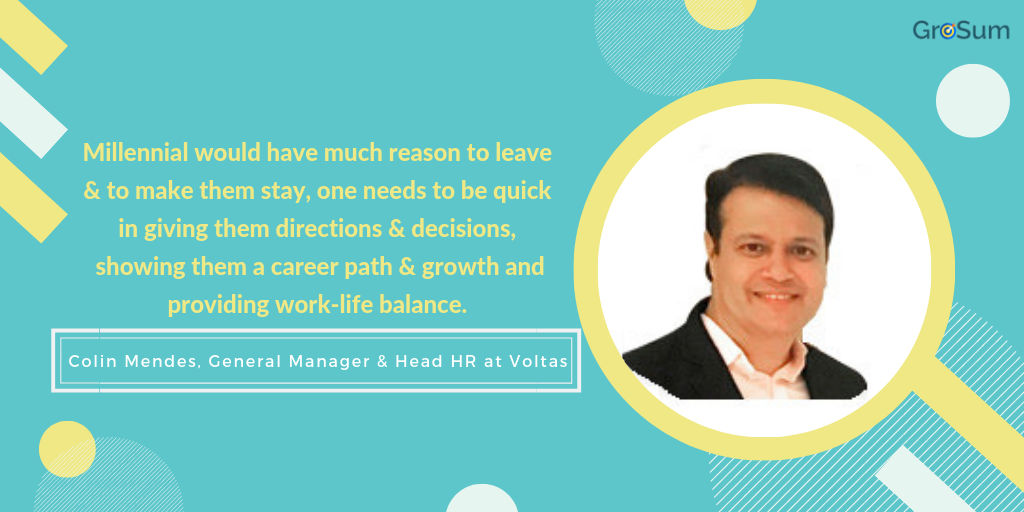 Anand Dewan feels that one of the key reasons to quit job among employees is better prospects and so they are leaving the message behind that the current organization and role did not meet that expectation of the future. 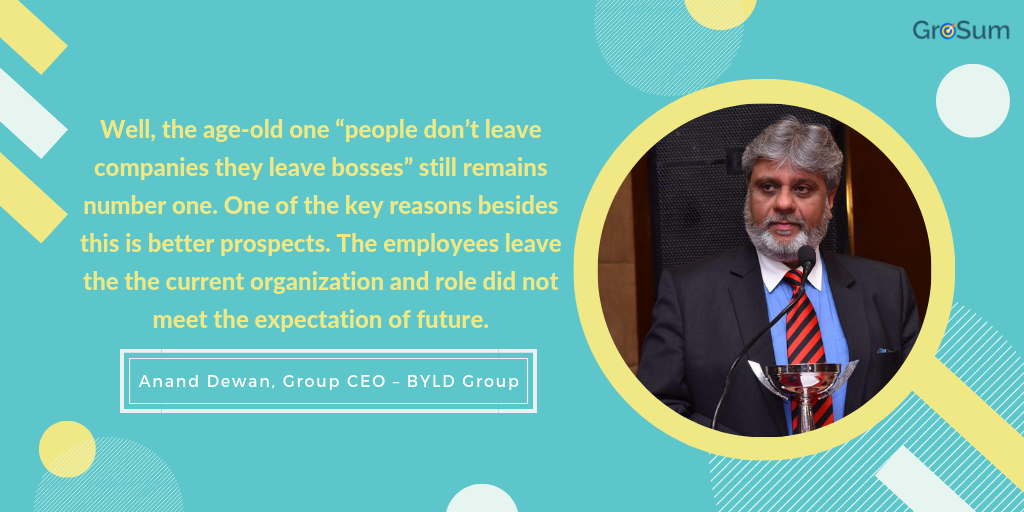 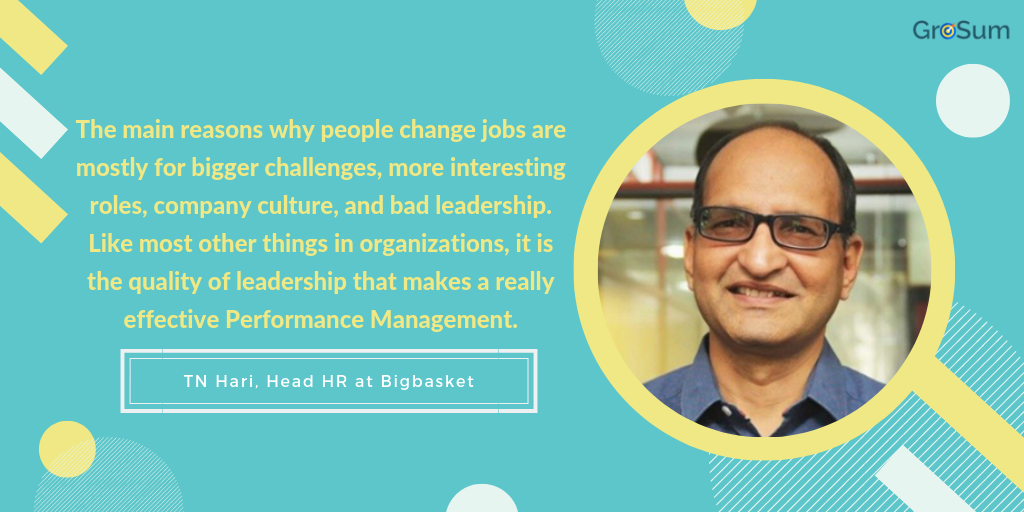 So, what you like to conclude after reading this?

The HR specialists, CEOs, speakers, writers, authors as well as the founders of many international organizations shared their opinions on how to make this situation under control and also how to get more effective performance management system in an organization.

Basically, the reasons which the experts more or less considered switching jobs are:

As you all read the above three much pretty common reasons opined by them. Finally, I would like to wrap up by saying, Employees are the gems of the organization and so it is the company’s responsibility to keep them happy by providing every necessity they can.

Beyond everything as Adil Malia says: “ People join companies but leave managers…..”

So, what do you suggest about the above topic? Let’s keep the conversation going.

Let’s us know whether you find this post worthy or not and also mention your views on this subject.